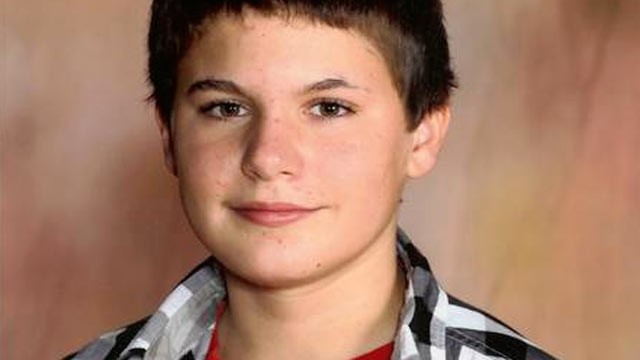 So this is how it happened.  We were laying in bed the other night and Alex was catching up on GCB on his iPad while I scrolled through my old, favorite video on YouTube.  And there it was; Jamey Rodemeyer‘s It Gets Better video.  I remembered finding it when it only had a few hundred views and I was instantly taken with his genuine innocence as he laughed, explaining that he had gone to Lady Gaga’s Monster Ball and been liberated.  “It Gets Better“, he said.  And he believed it.  I smiled seeing his video in my favorites and was immediately shocked to see it had more than 1,600,000 views.  Surprised, I immediately began reading the comments underneath which indicated he had died.  I searched on the internet and read article upon article about his suicide.  I watched video after video of news clips about his death.  I found the Lady Gaga footage of her concert, dedicating her song Hair to Jamey, who had Tweeted her the night before his suicide; “BYE MOTHER MONSTER, THANK YOU FOR ALL YOU HAVE DONE, PAWS UP FOREVER” I thought about his parents and sister.  I thought about Lady Gaga and imagined how, no matter how famous she has become, those 13 words she received were filled with emotion and held a great responsibility.  I thought about all of his friends and how death of a contemporary at a young age changes you forever.  Death of a contemporary anytime…changes you forever.

And I thought about me.

I didn’t know this kid.  Yet I found myself sitting in bed next to my husband, crying inconsolably.  Gone at 14 because he just couldn’t take it anymore.  I remembered those days of kids mocking my voice by lisping even though I’ve never had a lisp.  I remembered the days of being thrown into lockers or receiving death threats on my car.  For as long as I can remember, it has been daily.  And to some degree, I’m still bullied by stares I get when we’re shopping or out to eat and I refer to Alex as my husband.

In fact, today I don’t let it affect me much…but I’m not sure how I got there.  When I was in high school and people asked me if it hurt my feelings I played it off because I didn’t want to show any weakness.  But my pain was deep.  I was never popular.  I was never accepted.  And although I had lots of “friends”, the depth of our friendships was shallow.  The real friends I did have in high school never really cared that I was gay.  And they were the ones who would have been affected the most if I had died.

In 1990, the year I graduated from high school, I never once thought about suicide as a result to my pain.  I don’t believe that is because I had overwhelming support from friends or family, although I did.  Teachers and school administrators saw my being bullied and allowed it.  A lesbian teacher even allowed me to be openly bullied in her class…and she never said a word.  But this is not about being bullied, because it doesn’t really matter if you’re gay, or fat, or thin, or different…pain is pain.

It has been almost exactly a year since the stream of gay, teen suicides hit our country like an epidemic. How quickly we forget.  Can you name them, these soldiers of our War on Teens?  I can’t…and neither can most of you.  My mother died four years ago and already I’ve forgotten her voice.  How much time needs to go by before we completely forget these kids and their deaths? What is it all for if they are all forgotten. They are dying by suicide today because it is an option they see everywhere unlike 20 years ago.  Just go to Tumblr and Twitter and any social media site and you’ll find pages saturated with desperate pleas for help.

Which brings me to the point of this article.  How embarrassing, as social commentators, that we somehow entirely missed Jamey’s suicide, especially since we have been somewhat entrenched in supporting anti-hate and anti-bullying campaigns.  In all of the hundreds of articles we’ve read and videos we’ve watched, we completely missed it.  How is that even possible?

I spent the better part of that night watching videos on Jamey’s suicide and eventually came to Michael Buckley’s, famed YouTuber from WHATTHEBUCKSHOW, video which ends with a farewell to Jamey.  I constantly watch Michael’s videos and have been a huge fan for quite some time.  I was even more surprised that I had missed this video as well, so I watched it and immediately began reading the comments underneath. 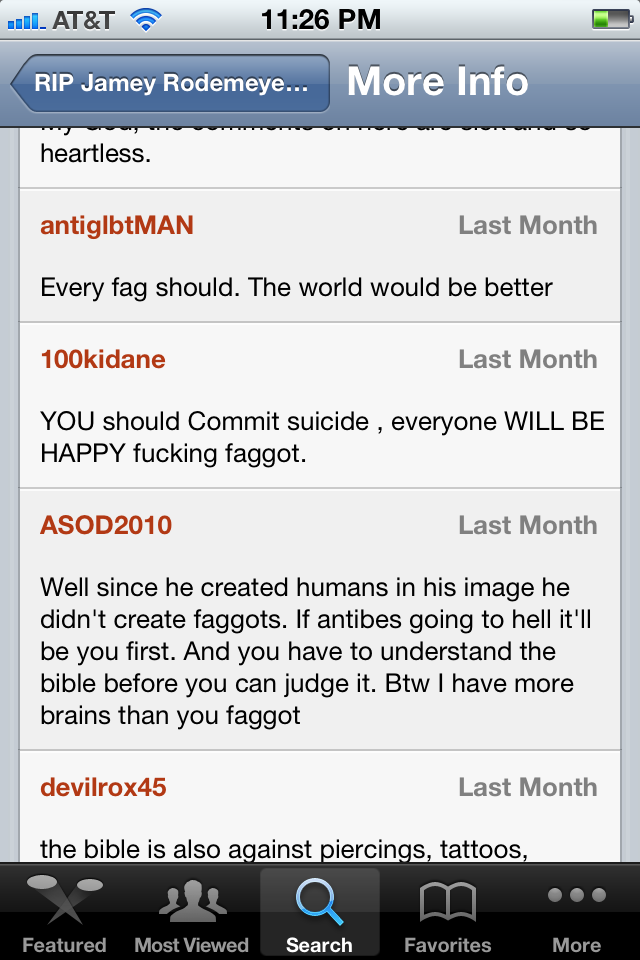 I was speechless.  I don’t even know what to say anymore.  I can hear the political bullshit.  I can hear the religious bullshit because I don’t really care and I think spirituality is personal.  But seriously? “You should commit suicide.  Everyone WILL BE HAPPY fucking faggot“? I’m sure we’ll be criticized for posting a picture of the comments and bringing them even more attention but they NEED attention.  THIS IS A DEATH THREAT! We cannot continue to ignore this.

I went to the pages of these subscribers and they are still there, allowed to continue to comment.  Why? I don’t get it? And people don’t think we’re treated like 2nd class citizens.  People think gays and lesbians have the same rights as everyone else? The fuck we do!

These people should be arrested for threats and intimidation because they are aiding in the future suicide of some teenager.  If you can look someone in the eye, and it has happened to me, and wish them harm for something that affects you in absolutely no way…you are a sick mother fucker! And if you are gay and out and do not stand against this, then you are part of the problem.

Am I angry? Hell yes I’m angry.  This has gone on far too long.  How many kids have to die before we hear what they are trying to tell us?

Fuck politics! Get human! Our children are dying and we’re talking about wars in other countries, economic crisis and education.  Do you think Jamey cares? He didn’t even make it to voting age.  We have got to start focusing on what is at our doorstep.  You want my vote? Make bullying illegal.  Period.  You want my vote? Marry us.  Period.  That entire Phelps clan from the Westboro Baptist Church can procreate hate but we can’t have the same rights? You want my vote? Appoint Lady Gaga as the National Ambassador Against Bullying because she’s apparently the only one these kids trust!

It Gets Better? When?  I think its getting worse.  According to the Surgeon General’s Report, the increase in teen suicide since 1980 is 100%.  Hello!!!! Over 4000 teens suicide every year.  That’s like the size of an entire high school.

We all have a voice.  Raise yours and be heard.  Make a change.  Fuck politics and get human.  Why aren’t we really listening to our youth? Why are we allowing 60 year old men to make decisions that don’t even affect them?   Why aren’t we human anymore? Make a kid feel important.  Validate his or her existence.  Ask them what’s wrong…and really listen.  Don’t just sit back and act like it’s going to change because it’s just getting worse…and that’s the reality we’re afraid to tell our children.

But we have the power to change that reality.  We have the power to make our voice heard.  I cannot sit back and watch one more child die in this war and not feel as if I tried to make a difference.  Maybe that’s naive.  Maybe that’s the innocence in myself that relates to Jamey’s video, but I have to try.  Because every one of these teens deserves to have the amazing life I have today. Every one of these teens deserves to sit in bed next to their husband or wife someday and feel just as normal as their neighbors.

I can wash spray paint off my car and scrub the word faggot off of lockers, but I cannot bring Jamey back from the dead.  I wish I could.  I wish I could talk to him for just one hour and show him how wonderful things can be and that one day he’ll be just as happy as I am…but I can’t.

If politicians want the vote of gays and lesbians and those that support us, make them work for it.  Stop allowing them to give us empty promises.  Make them give us the right to equal marriage and make bullying illegal.  Now! Allow us to step back, think of ourselves at 10 or 12 or 15 and remember how tough it was…and get human.  Allow us to think about Jamey, and all of the soldiers of this war, daily…and never forget.  And allow us to let the words of Lady Gaga to Jamey in her concert resonate loud and clear.  “You are not a victim.  You are a lesson to all of us.”

We Love ya buddy! And we promise…we’ll never forget you! Paws up forever!