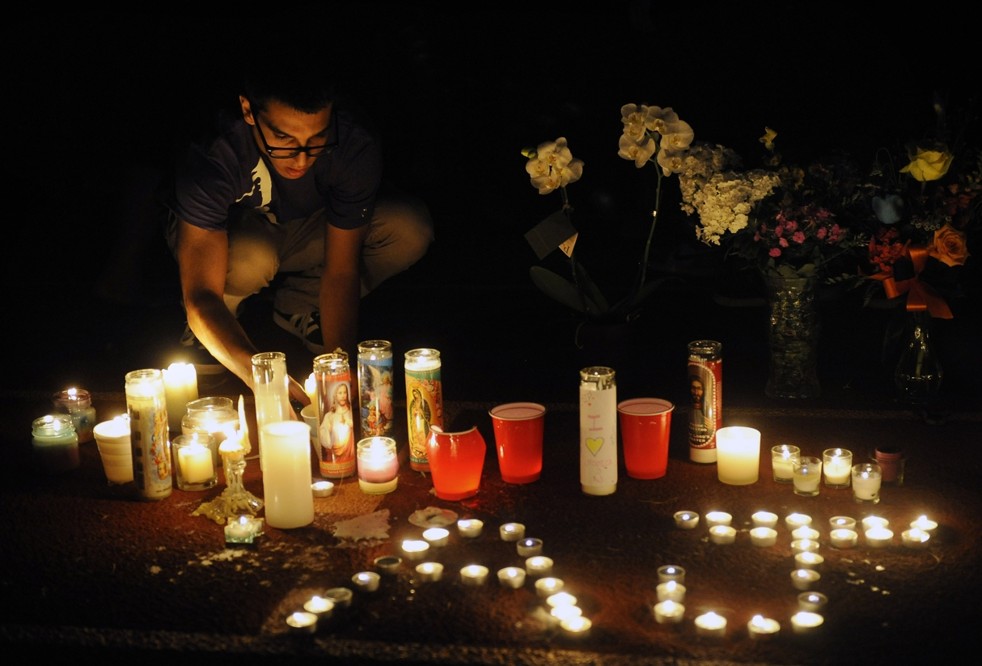 Sundays in our home are movie nights, usually followed by True Blood.  All week long Alex has been excited to go see either The Amazing Spider-Man or Dark Knight Rises.  Today, while thumbing through our Twitter feed, we saw it quickly fill up with news of President Obama‘s visit to Aurora, Colorado to meet with the victims and the families of the shootings.  I told Alex we could go to see Dark Knight Rises any day, but today, we should go see something else, out of respect for the victims of the shootings.  He agreed.

Walking into the movie theater tonight was surreal.  Crowds of people lazily walked out after seeing Dark Knight Rises, as we walked in for the late show of Spider-Man.  Although it was just another Sunday night at the movies, it felt different.  As we ordered popcorn and soft drinks I noticed the prices of the concessions and how they had increased so much since the summers when I was in high school and went to the movies with my friends.  I missed those days of mindlessly walking into a movie, hoping to see other friends or a possible crush.

After sitting down in our seats, we both checked in on Facebook and I even wrote on our raannt Facebook fan page that we would be writing a review of the movie.  There will be no review.  Don’t get me wrong, the movie was fantastic; even better than I had imagined.  The absolute perfect summer movie.  During one of the greatest scenes in the movie, a Coldplay song, Til Kingdom Come, echoes in the background.  I tagged the song on Shazam and bought it on iTunes as soon as we left the theater.

Driving home, Alex pointed to a flag at half mast in honor of victims of the shootings in Aurora, Colorado.  “Did you know he was a Ph.D. student who had dropped out of school and was on unemployment?” I asked.

“He was a terrorist.” Alex said bluntly.  “If he were from any other country, he would be labeled a terrorist.  He brought fear and terror into the hearts of people so to me, he will always be a terrorist.”

I nodded in agreement.

As we drove in silence, the Coldplay song strummed through the open windows while I remembered summers of my youth when blockbuster movies, stolen kisses and late night country drives singing our favorite songs seemed to keep us stuck in time.  The truth is,  I’ve never really internally grown up and those are still some of my favorite things today.

When news of the shootings began to hit I was still up, reading on our front porch.  My initial thought was about the safety of Alex’s brother and his friends.  Although I knew they were in Indiana while the shootings occurred in Colorado, I was still worried this might be some mass terrorist attack.  I wondered what it might be like for all of the families of the people who were at the theater?  I couldn’t imagine.  I’m not sure any of us really could unless it happened to us.

I sat outside, listening to the crickets already playing their late summer tune.  I watched as a few people walked their dogs, completely oblivious to the terror on the other side of our country.  I wanted to call and make sure Alex’s brother was safe.  I wanted to tell the dog walkers what I had seen on the news.  I wanted to wake Alex from a deep sleep and tell him what had happened.  But what could we do about it?

The next day, news on the radio and television aired news of the story with reports from witnesses and family of the victims. The suspect, James Holmes’ was identified.  Even his parents issued a statement of regret for the victims, also stating that the police had the right person.  Having recently watched We Need to Talk About Kevin, I couldn’t imagine the devastation this would have on Holmes’ family as well.  Again, I wanted to stop people at the gas station and ask them what they thought.  I wanted to talk about it with my friends.  But what could we do about it?

Nothing.  And that is the sad end to this story.

We live in a world today of reaction and response.  An event occurs and we react.  We gather our notes, say the appropriate words and we respond.  And then the world slowly changes.  We’ve learned a lot since those Columbine and September 11th days.  We’ve learned how to appropriately respond to national terrorist attacks. But have we forgotten the price?

The price of popcorn and Junior Mints continue to rise and now we’re even afraid to go to the movie theater.  Our kids who are on dates or getting ready to leave their homes for college can’t even enjoy the innocent gifts of summer.  Maybe in a few years we won’t be allowed admission to the movies without walking through a metal detector and displaying identification.  Maybe in a few years we won’t even have movie theaters anymore.  Life constantly changes and we continue to react and respond.  Forgetting events, victims and the threat of terrorism again is part of our response.  It’s the American way.  “Oh, has it really been five years since the Aurora, Colorado shootings?”

But what can we do about it?  The world is a scary place today.  Maybe the best we can do is live our lives like innocent children swinging on the playground, higher and higher, enjoying every moment until it is our time to jump.

Having our flags at half mast is the least we can do.  We can start by remembering.

Just for today, let’s smile, remember all of the good times and honor those who’ve come before us…because, as my mother always said, we’re on borrowed time as it is.