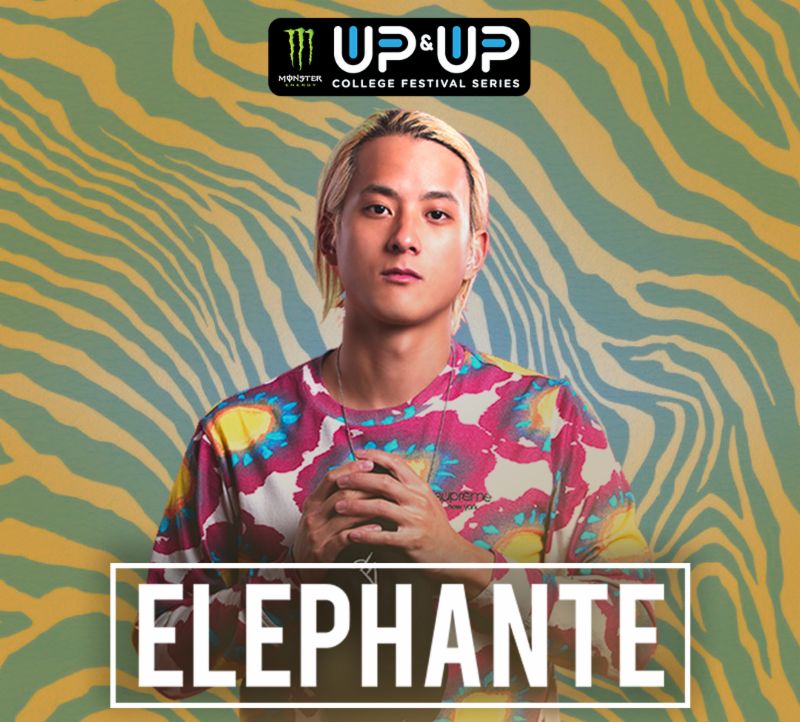 Monster Energy is thrilled to announce American DJ Elephante as the headliner for its Fall 2019 Up & Up College Festival series. The four colleges that generate the highest pre-sales in 48-hours will bring the headlining artist to perform at their college towns.

Elephante (Tim Wu) has spent the past few years wowing audiences at major music festivals across the country (including EDC Las Vegas, Electric Zoo, and Hangout Fest) and amassing hundreds of millions of streams worldwide. The Ann Arbor, Michigan-raised, classically-trained pianist and singer-songwriter initially took a desk job before embracing the “Elephant in the room” and leaving office work behind forever to pursue a career in music. His two independent EPs, I Am the Elephante (2016) and Glass Mansion (2018) have won him international acclaim as a groundbreaking presence among dance music producers.

The Up & Up College Festival series first kicked off in 2016 as an electrifying competition that pits colleges against each other in a 48-hour guerrilla campaign to sell the largest number of pre-sales. Each season, student influencers at participating schools create teams and work over two days to motivate their student bodies to pre-order reasonably priced tickets. Top-selling schools win the competition and bring a popular headlining artist to perform at or near their campus. Since its inception, the Up & Up College Festival series has become one of the fastest-growing music properties in college communities across the US.

Washington State and Wake Forest won the 2016 competition, bringing Cash Cash to their schools’ festivals. In the fall of 2017, students at San Jose State, UC Davis, Washington State University, and UT-Austin partied at a performance by DJ/Producer Alan Walker. San Jose State, UC Davis, and UC Santa Barbara battled hard and won the spring 2018 pre-sale contest and brought GRYFFIN to their campus Up & Up College Festivals. Meanwhile, Dayton, San Jose, Lehigh, Ohio Oxford, and Bryant brought Two Friends to their campuses in the fall of 2018. This past Spring semester had Slushii visit Penn State, Alabama, JMU, UNC Wilmington, Iowa and WSU.
The Up & Up Festival Series competition utilizes an innovative ticket sales concept that only charges the credit cards of purchasers should their college win. In addition to bringing trending artists to winning campuses, the the competition is a positive way to bring student bodies together, foster leadership, and spark interest in/provide access to future jobs in the music industry.

“I’m pumped to be a part of the Monster Energy Up & Up Festival!” said Elephante. “I cut my touring teeth on a lot of college shows, so to be able to come back now on such a bigger scale after all these years feels very full circle. Some of the best times of my life were going to shows like this in school, so I can’t wait to bring it back and turn campuses into a zoo for the night.”

Monster Energy will unveil the colleges competing in this fall’s event on August 26, and the 48-hour competition will go live on September 10. The Up & Up College Festivals for this fall’s four winning campuses will take place in October and November.

To learn more about the Monster Energy Up & Up Festival, visit https://upandupfestival.com/.