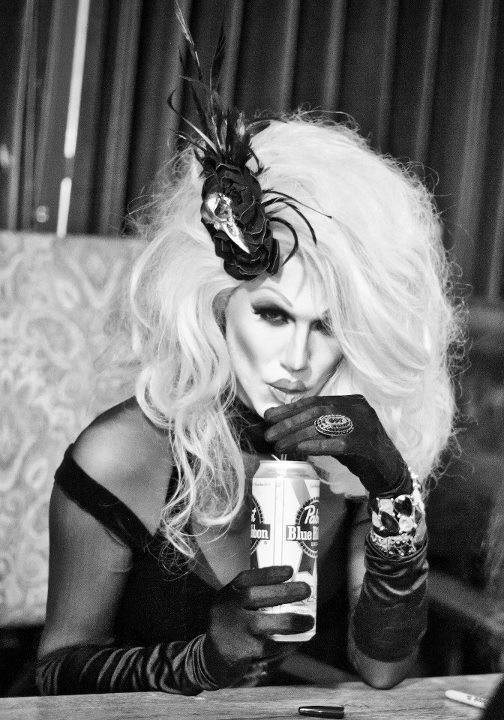 Sharon Needles might possibly be our favorite drag queen of all time.  Why? Maybe it’s because she drinks PBR straight out of the tall boy can.  Maybe it’s because she’s cocky and humble in the same breath.  But most likely it’s because we’re so drawn into this character we’ve never seen before, because Sharon Needles is definitely that…a character.  Although she’s the high priestess of RuPaul’s Drag Race Season 4, winning the capital crown of America’s Next Drag Queen Superstar, she is more like Carrie winning the prize of homecoming queen.  And in the same fashion as the movie, when warned, “they’re all gonna laugh at you“, look who’s laughing now folks… 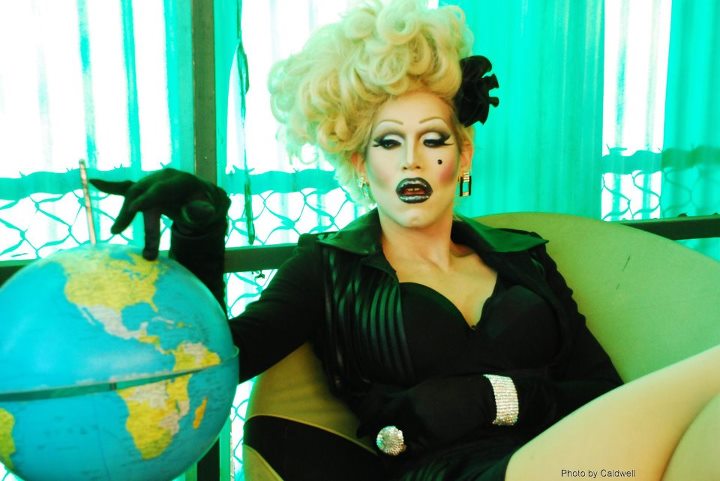 1. What 6 words would you use to describe yourself?

2. You¹ve spoken in past interviews about getting started in drag at the age of 15.  Tell us about the very first show you ever did?

It can easily be Googled. No one ever asks about the second show. Or third, fourth, fifth, sixth, seventh, eighth, or ninth.

3. Why is there beauty in flaw?

American beauty is based on lies. Though I live in a fantasy world I tend to be attracted to the truth. The second things make me uncomfortable I want them. Anytime I see lipstick on women’s teeth, within 30 seconds I wish it were mine.

4. Tell us about your relationship with Alaska.  What real or fictional couple are you most like? 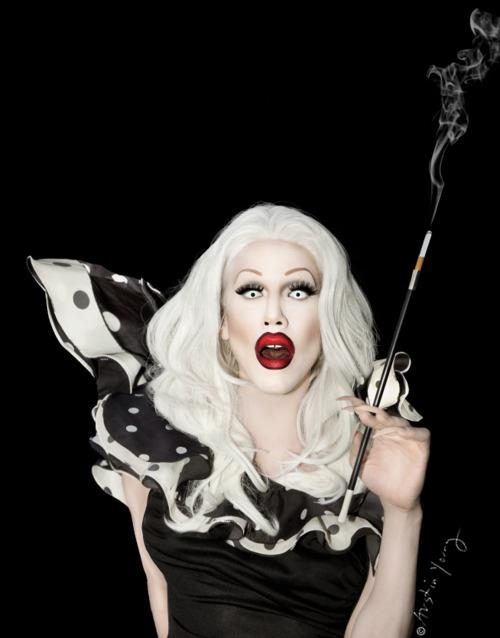 5. We love your art because it laughs and resists in a time where pop culture has taken a main stage.  What do people not understand about you that you¹re trying to communicate?

I purposely take imagery, language and fashion as a way to make an audience feel uncomfortable. The same way they connect with me, I take their dark issues and force them into spotlights. I’m like a tiger in a zoo, no real harm can be done, but you enjoy the entertainment of fear.

6. You¹ve said anti-bullying is your platform.  Tell us about your experiences being bullied growing up (and feel free to call anyone out).

I don¹t give notoriety, press, or fame to those who made my life a living hell. I¹m the fucking star, let¹s talk about me.

7. What advice would you give a teenager who is being bullied?

There is no advice you can give to someone who is becoming an adult. It¹s a dog eat dog world, survival of the fittest, let the bullshit make you stronger, I¹m not designed to be a role model, I just wanted to be a model.

8. Who are your 5 all-time favorite drag queens? 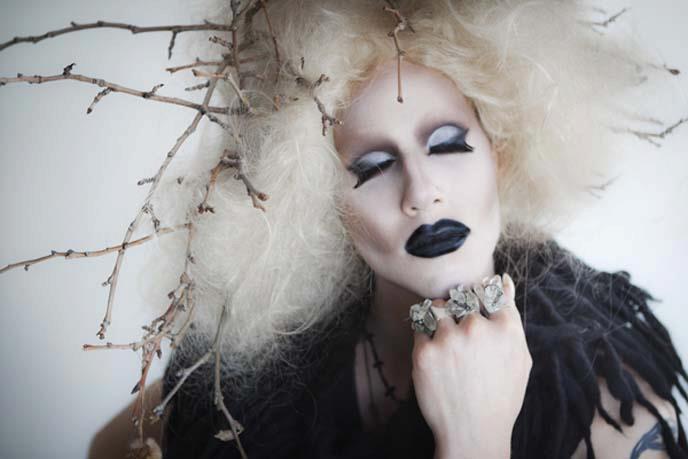 9. If you could only listen to 3 CD¹s for the rest of your life and they couldn¹t be mixed, what would they be?

I’m a vegetarian. I have a huge ego with low esteem. I’m an alcoholic.

11. What does your family think about Sharon Needles?

My parents always wanted the best for me. They are open-minded people, but they were just worried about my longevity in this volatile career of show business. My mother, who was my biggest enemy, is now my number one fan.

12. What does Sharon Needles have that Aaron doesn¹t? 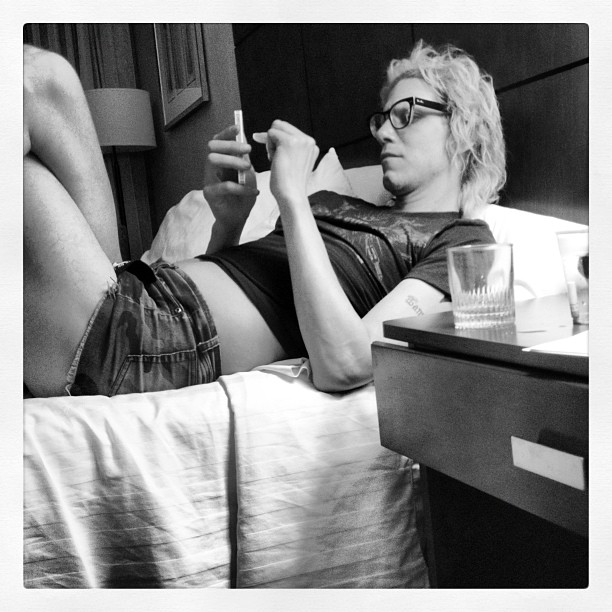 13. Do you think RuPaul¹s Drag Race is a fair representation of drag?

RuPaul’s Drag Race admits the viewer a backstage pass to the humanity, humility and absurdity of drag. Drag queens are usually perceived as celebrity clowns, and RuPaul¹s Drag Race is the only program allowing fans to see that we’re not only beautiful creatures of the night, but we have beating hearts as well.

14. People have said that you are a Satanist and a racist.  How would you respond to those allegations?

As a self-educated socially conscious artist, I use shock imagery and language to reflect the true demons of our society.  I take the darkest issues and put them into the brightest spotlights.  I don’t believe in God, and I don’t believe in Satan, I believe in myself and I believe in you. When I say Hail Satan, it’s my juxtaposition to the valley girl saying Oh My God!  I’m no fucking valley girl. And thank you for your investigative reporting.

15. You have commented on an appreciation for Andy Warhol and that generation of The Factory.  How do you integrate that era into your art?

Andy Warhol always said everybody would be world famous for 15 minutes, well I got 15 episodes. Andy Warhol reminds me that fame is art, and art is dead, and so am I. Let¹s all die.

16. You¹ve said that your act is about bringing dark issues into the spotlight.  What are some dark issues you¹d like to bring into the light?

In the words of Andy Warhol, no comment. My art speaks for itself, I don¹t answer for it in interviews. 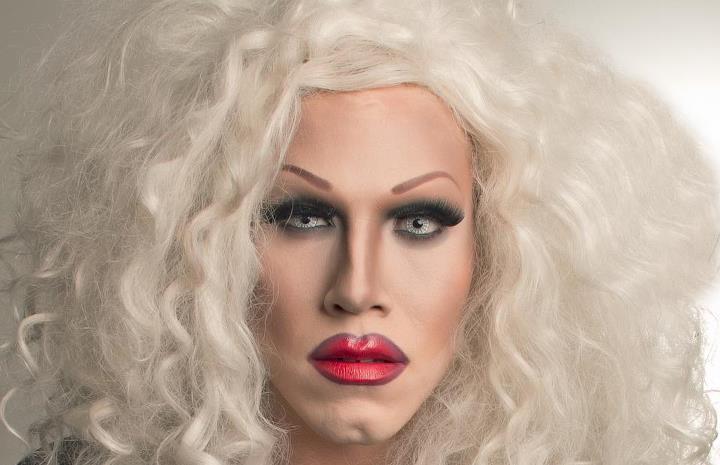 17. You seem completely educated and appreciative of a cultural artistic underbelly. To you who are some of the main contributors of this movement?

18. Who are your 3 favorite fashion designers?

Return of the Living Dead, Death Becomes Her, and The Wonderful and Wild Whites of West Virginia.

Sarah by J.T. LeRoy, A Confederacy of Dunces, The Dirt (True Story of Motley Crue) 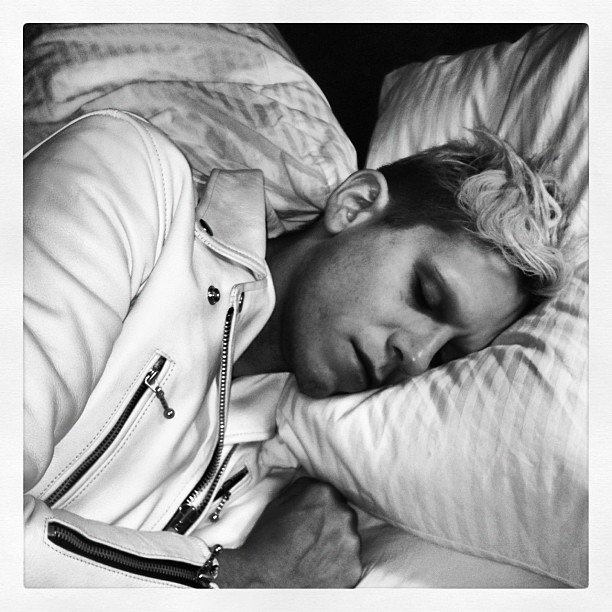 Favorite place to have sex?

My bed at home, you freak.

Favorite place to trick or treat?

Shut up, this question is RuTarded.

19. What do the ghosts whisper to you?

I don¹t believe in ghosts, but my conscious whispers a lot to me, which is nobody¹s business, and if you heard it you¹d be reaching for the gun.

Check out all of our related interviews Phi Phi O’hara, Ongina, Tyra Sanchez, Shangela, Johnnyboy and Gregory Gorgeous from YouTube and Erica Andrews, Cassandra Cass and Maria Roman from the film Trantasia in our Interview Section!