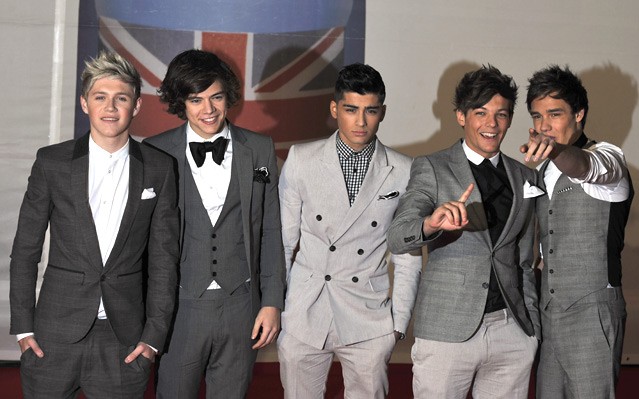 Justin Bieber was done the second these five guys stepped on the stage.  Probably not(since he has obsessive fans that will become the likes of Elvis’ 40 year old groupies)…although we’re having a difficult time imagining dear old Justin, who should be singing “If You Were My Boyfriend” instead of “If I Was Your Boyfriend”, transitioning into the likes of reputable actor Justin Timberlake or Mark Wahlberg.  It might be time for Justin to pay another groupie to have sex with him, actually get her pregnant this time and settle down.

Niall, Zayn, Liam, Harry and Louis.  Don’t worry folks…if you have crushes, no matter what age you are or how inappropriate it may seem, all of the boys are over 18…so crush away! (We’re Niall and Zayn fans…for their style of course.) Often referred to as the new British Invasian(are we seriously comparing them to The Beatles), one thing is certain, teens around the world are losing their minds over these boys.  Twitter, Facebook and especially Tumblr is filled with images and gifs of these boys in various poses, caught off guard and even a few in, what would seem, compromising positions.

The band, formed for the British television show The X Factor, actually can sing.  We loved their breakout song “What Makes You Beautiful” even before we realized it was actually a boy band and not remnant members of a thrash band singing it.  We just didn’t realize they were singing it to us!

And maybe that’s what we all secretly love about boy bands, whether we like to admit it or not.  They’re cute, they’re fun and they are reminiscent of good times.  If you’re a teenager, it might be the song you sing to with your girlfriends in the car late on Friday nights this summer or hear in the background as you kiss your first boyfriend.  Or maybe you’re a gay teenager who hears this song and  feels ok with yourself for the very first time…ever.  If you’re older, it might remind us of those days before the world got real and bills, taxes and troubles lurked around the corner.  Boy bands are our youth…no matter who you are.

We wouldn’t have been caught dead listening to boy bands, much less admitting our love of some of their songs, favoring The Smiths and The Cure.  But truth be told, many summer nights were spent dancing with girlfriends to LFO’s Summer Girls.  So settle down.  Its almost summer. The reality is we all love boy band music because we it doesn’t make us think too hard.

So enjoy being younger, whether you’re 15 or 50, and get beautiful! You only live once!