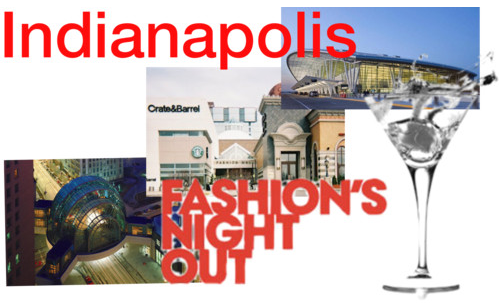 Thursday, September 6, 2012 is Fashion’s  Night Out around the world.  This year marks the event’s 4th birthday and we’re lucky enough this year to have this amazing even in our hometown of Indianapolis! The website for Fashion Night Out boasts:

Join editors, stars, models, fashionistas, and designers on September 6, 2012, as they flood stores in cities across the country and around the world for fashion’s most iconic extravaganza.

Last year’s bash featured events in eighteen countries and more than 4,500 events here in the States. With special limited-edition products, celebrity appearances, and unforgettable performances, FNO 2012 is promising to be even bigger and better than before!

We’re lucky enough to attend all three major events hosted across the city brought by Pattern Indy and SocialClub19.  First stop will be a VIP reception at the Arts Garden in the Circle Center Mall.  Next we’ll spend some time at the Fashion Mall for some shopping and drinks.  After that we’ll head to the Indianapolis International Airport for the final reception.  The night will end at Blu for the after party to this amazing evening!

Fashion Night Out is meant to celebrate fashion and style, so follow us on Twitter with the hash tags #FNO #FNOindy #raannt as we run around celebrating all the fashion Indianapolis has to offer! We’ll show you the things we like –and those we don’t! All night long we’ll be Tweeting and giving a play by play of the events.  We’ll also be giving out a few fashion awards throughout the night, so make sure to follow us on Twitter @theboysofraannt and on Facebook at raannt to keep up with all of our antics!