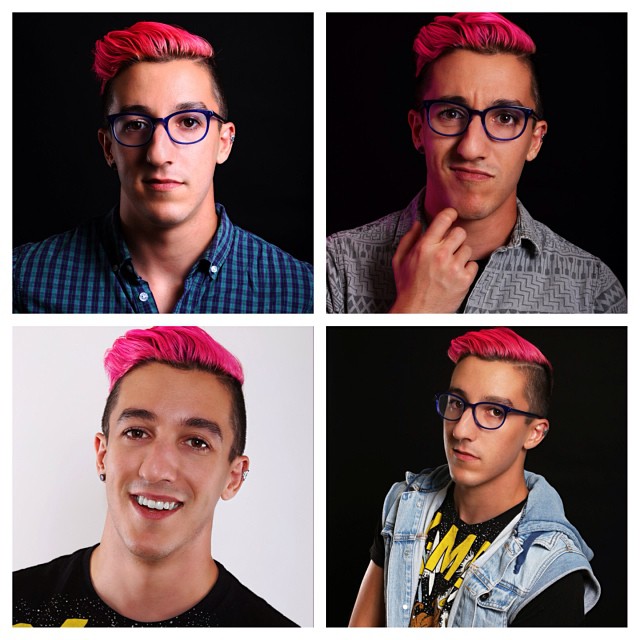 We love Neil McNeil for so many reasons. Being that we started watching him at the beginning of his YouTube career, we feel like we’ve been there through it all; the hair color changes, the humorous videos and collabs and the daily Vlogs. And maybe without even realizing it, he’s grown up in the last year and a half, right in front of all of us. Maybe that’s what we love about him the most; the fact that even though he can be overtly sexual and flirtatious, even in a humorous way, there is a boyish charm and innocence, if not humility, in that smile; and we’re suckers for humility and charm. That being said, he doesn’t usually wear pants when he’s filming. Don’t believe us? Check out what he told us below! 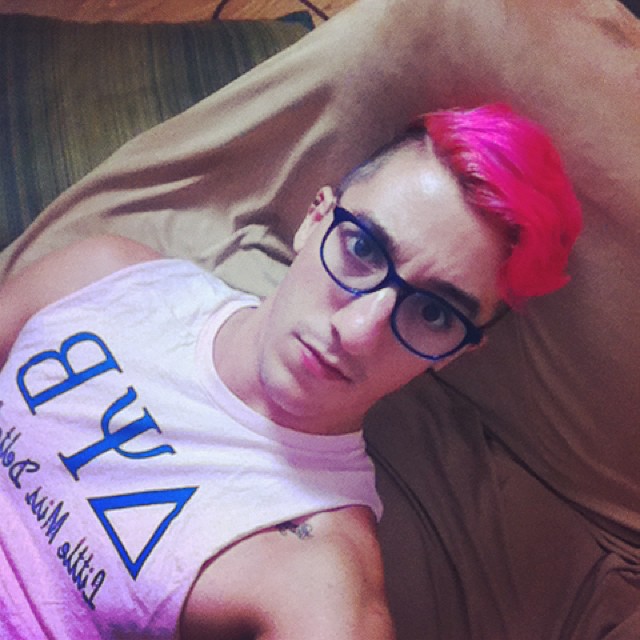 I was actually working for a YouTube production company called Geek & Sundry at the beginning of 2013, even though I had never thought about starting my own channel before. While I was there, they were looking for a variety of new Vloggers to sign to their network, and when the head of the company, Felicia Day, asked me to find her a gay YouTuber who was also a geek, I thought about it and said “Well, what if I just started making videos?” A few days later I had my first YouTube video shot and edited using a friend’s equipment, and a week later they signed me to their network and wanted me to make more for them. From there I started my own channel, which kind of took on a life of it’s own over the past year and a half.

I started uploading videos May of 2013, but I noticed my following start to pick up around September of that same year when I actually started hanging out with other YouTubers. I had met a few at VidCon that August and kept in touch with them, and I found out that a daily Vlogging couple (Will and RJ of Shep689) lived in my neighborhood, we quickly became friends and I started making more consistent content and collaborating with other Vloggers. 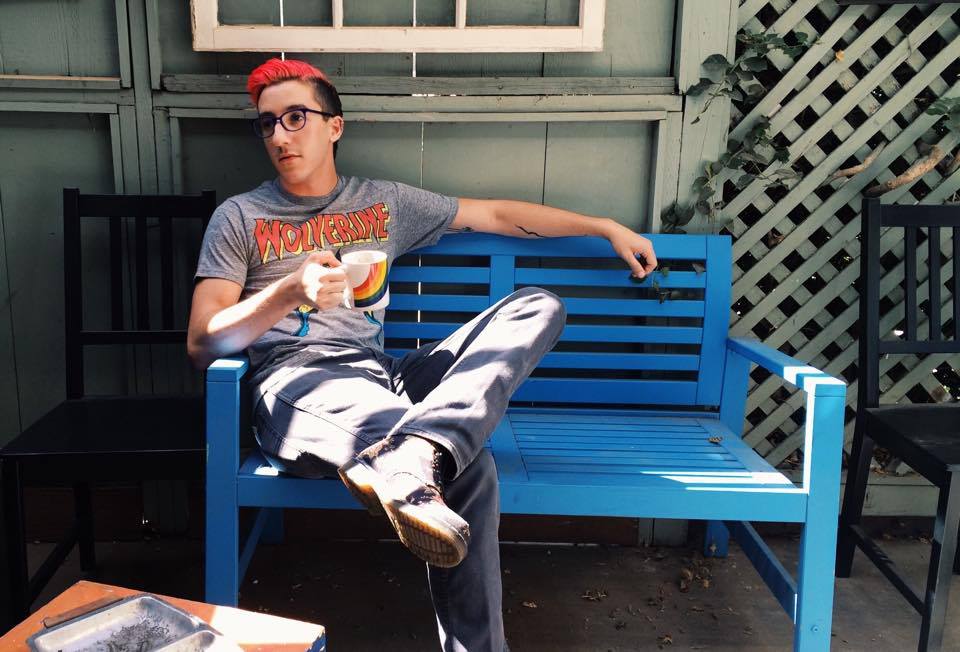 Oh I love this question! Let’s see if I can name off some things people don’t already know:
-When I was 16 I earned my black belt in Karate
-I was crowned Mr. Emerson College my senior year of school
-I’m the biggest Gilmore Girls fanatic
-I drink 3 to 5 cups of coffee a day on average
-My hair has been a mess of colors over the years, including blonde, blue, red, purple, and most recently, pink.

Do you receive hate mail or comments and how does it affect you?

When my audience first started picking up, I was also getting trolls on my videos. Nothing too bad, just the occasional derogatory slur about my sexuality or people poking fun at my nose. But the letters and the comments and the Tumblr messages I get from people telling me that they love watching my videos, and that somehow what I do on YouTube has a positive effect on their life makes all of the hate worthwhile.

My all-time favorite video I’ve ever done is my “Straight Guys React To Grindr” video because it was so different than my usual Vlogs, but it turned out hilarious. I also really love my tattoo video where I explain what each one means to me since people are always asking, and I did a really fun video with some of my other close YouTube gays where we all read passages from “50 Shades of Grey”. But I make it a point not to post videos I don’t absolutely love, so they’re all kind of my favorites. 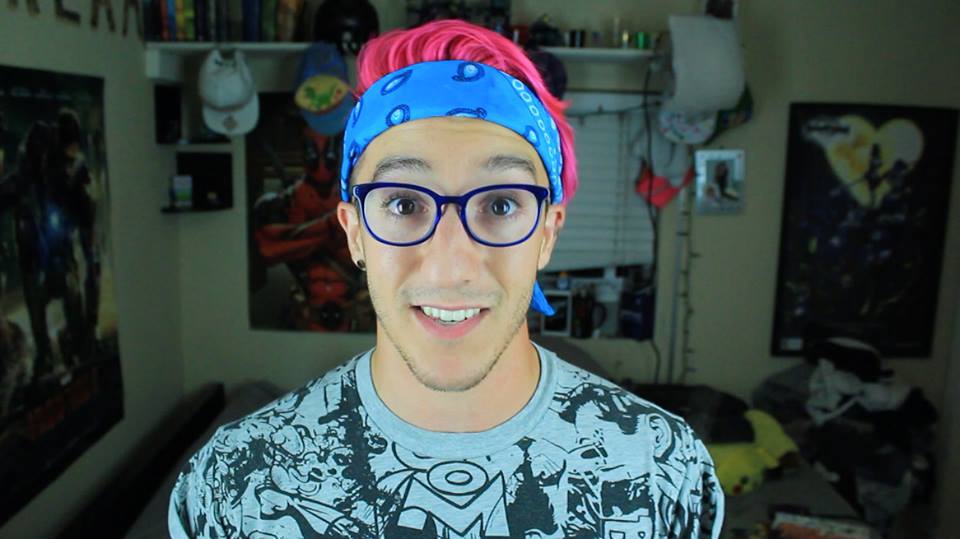 That’s like asking a child which type of puppy is their favorite. Let’s see if I can narrow it down to 5:
Tyler Oakley, of course. He’s the original YouTuber, and I don’t know a single Vlogger who doesn’t look up to him and the amazing work he’s accomplished over the years
Grace Helbig, because I would do anything to be that naturally funny and witty and charming and pretty. And yes, I definitely have the biggest lady-crush on her
Anna Akana, because you can tell she puts so much hard work and thought into each video. She’s never one to phone it in (and literally just post a Vlog she shot on her cell phone) and her content always looks amazing and feels so natural.
Miles Jai, because he has such a wide variety of videos but always manages to pull off whatever style he’s doing. Plus, he always looks flawless.
Okay I can’ pick a 5th, but I’m going to say literally every single one of my friends I’ve made through YouTube. We’re all such different people with completely different voices, but I love being inspired by my friends and watching them succeed in doing what they love. Go to my channel and click on ANY of the faces you see in my side bar, you won’t regret it.

I think the biggest one is that not all of us do this as a full time job. Most people look at YouTubers as people who only upload videos and spend all their time doing that, when really a lot of smaller YouTubers have day jobs and other side projects they’re consistently working on. We also don’t all know each other, YouTube’s a pretty big place and it’s impossible to meet every single person you technically “work” with. Also, most of the time we aren’t wearing pants in our videos if we’re just shooting from the waist up. 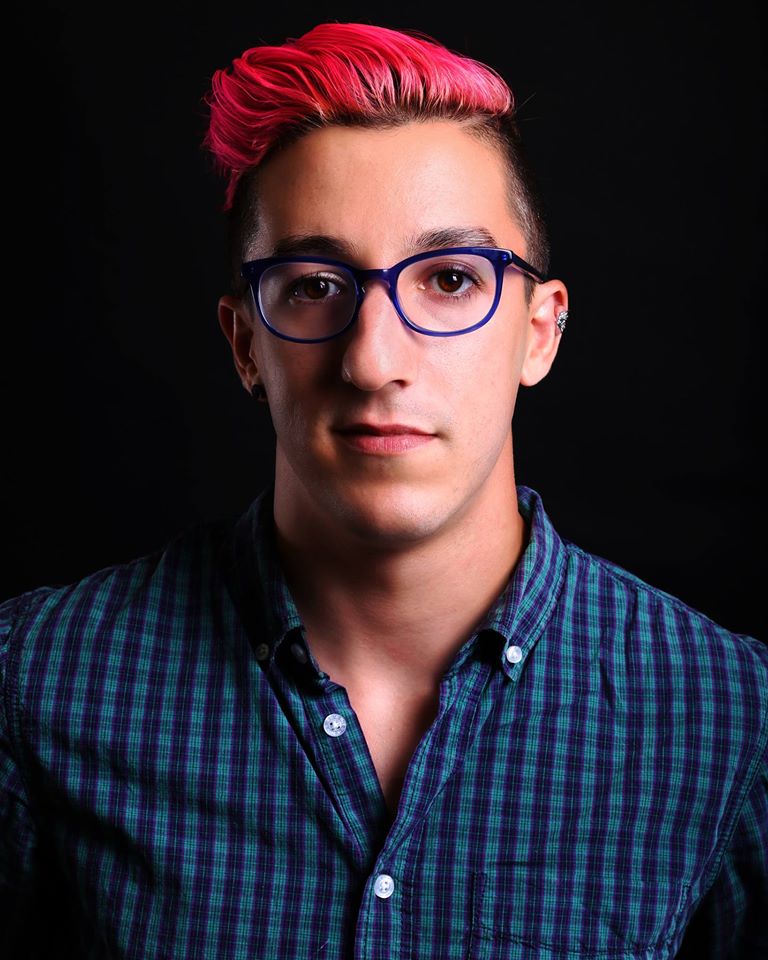 I get this a lot, and honestly if you want to have a strong following, don’t think of it that way. Go into YouTube wanting to talk to people and reach an audience you normally wouldn’t get to. Whether it’s 50 or 50,000 people watching your videos shouldn’t matter, what matters is what you can bring to the table and what you have to say. If it’s something you love and are passionate about, the followers will follow.

Do you think there is sexism, homophobia or ageism with people watching YouTube videos, meaning do you think gender, sexual orientation or age affects following?

I think it’s just a matter of people wanting to watch content that appeals to them and their interests. I wouldn’t be offended if somebody passes over my channel because I’m an LGBTQ vlogger, but I will call them out on their homophobia if they bring that to my page and leave nasty comments. Certain people look for certain content to watch, it’s just a matter of finding what your voice is and who you’re trying to reach.

People make money from YouTube views, sure, but a lot of the income comes from brand deals, sponsorship opportunities, and merchandise that come along as your audience grows. YouTubers can’t just rely on views alone to make money. 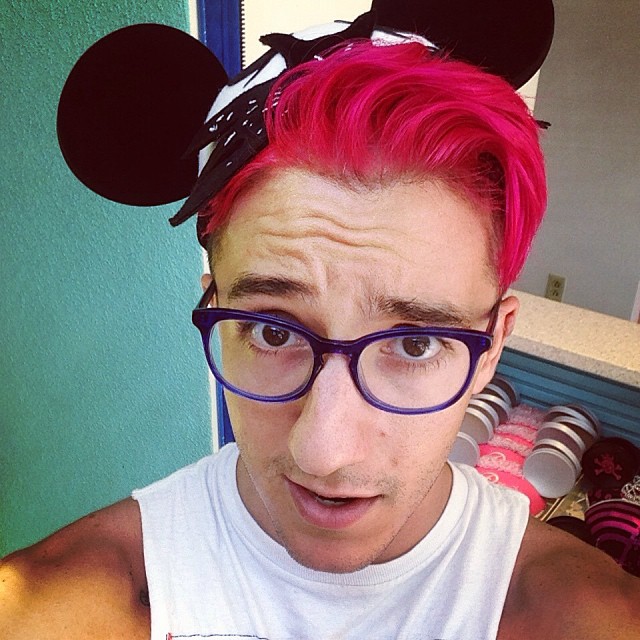 Never ask how much they make per click, or per subscriber, or per ad. People get tired of that question very easily. And if you’re a fellow content creator, I’ve always found it offputting to ask to collab right after meeting somebody. Let that come naturally. I wouldn’t film a video I don’t feel comfortable doing, and if you’re a complete stranger who wants to shoot something with me, I’d want to feel comfortable around you first before diving into any on camera stuff. I’m terribly awkward when you first meet me, and so are most other YouTubers (probably).

It’s great, and sometimes I forget that what I’m doing on YouTube is actually reaching such a wide audience. Whenever I get a new letter or comment or message saying that I helped somebody, it really puts it all into 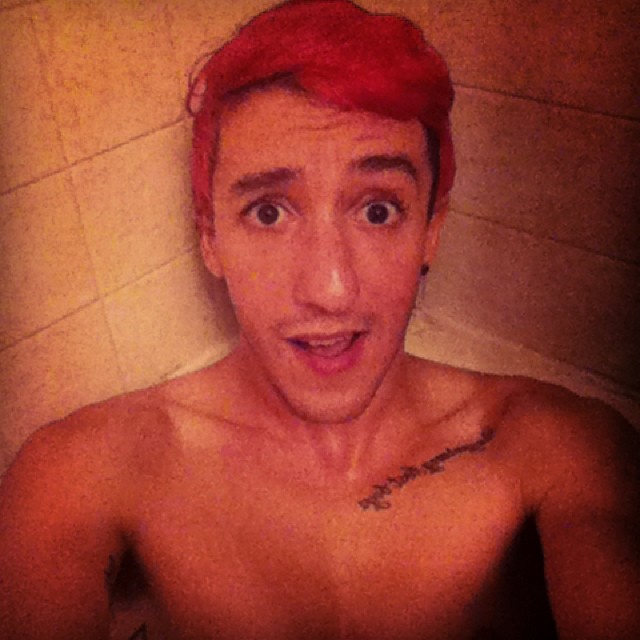 For my sit down videos I use a Canon t4i with a 35mm lense and a softbox lighting kit I picked up from Amazon. As for editing, I’m old school and still using Final Cut 7. Not because I can’t afford to upgrade, just because I’ve been using it for 8 years now and know it like the back of my hand. Change is scary. Don’t make me download Final Cut X.

I rarely talk about my current dating life on YouTube, and I feel like a lot of Vloggers are in the same boat. We share so much of ourselves on the Internet that we like to keep the occasional bit of our personal lives to ourselves. I’ll also never bad mouth another YouTuber directly on camera, that’s just poor etiquette. As for embarrassing, I once covered my naked body in peanut butter and shot a rap music video about getting a blow job. My mother saw both of these videos. I’m bulletproof at this point. 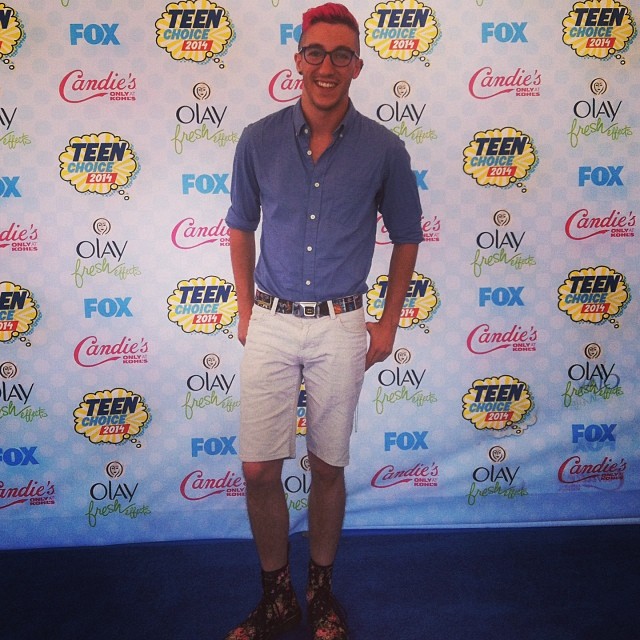 Have you ever received any fan mail or hate mail which really changedyour perspective on the impact you have through your videos?

Every single message I get from my viewers affects that way I make videos, as weird as that sounds. I’m always working to figure out what my viewers are interested in seeing and how I can give them more than that. I started making YouTube videos as a way to express myself, but I kept making them to reach people.

Oh lord, I think I got asked this same one in a video I did with Matt Lush. Okay…. Marry Tyler because he’s the ultimate bae, Fuck Miranda because you know she’s a secret freak in bed, and kill Joey because his face is too perfect and no human should ever be allowed to look that flawless all the time.

Anna Akana did a make-up tutorial that was actually one of the most beautiful messages about self- worth and confidence I have ever seen. It’s called “How to put on your face”. I watch it regularly to remind myself to be true to who I am. 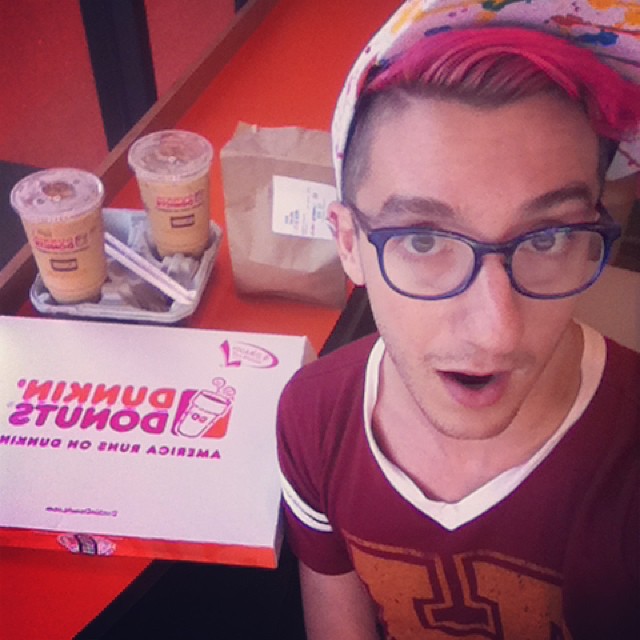 I obsess over TV shows and right now I can’t wait for Once Upon a Time and Agents of SHIELD to come back. I’m also a huge comic book nerd and have a massive collection. Recently I’ve been getting into snapbacks and bandanas too, because apparently I really want to look like a member of 5 Seconds of Summer with my neon pink hair.

Sexy equals confidence in my mind, but I draw the line at cockiness. Sexiest celebrity? Probably Chris Pratt. Place to kiss? In the rain. Next to a waterfall. And there’s an explosion in the background. Food? Ummm ice cream. Song? Black Sheep by Metric from the Scott Pilgrim soundtrack. I’ll play that song when I get out of the shower and do a full dance routine to it. It’s really awkward.

Check out all of our other YouTube interviews including Tyler Oakley, Will & RJ, Miles Jai, Jake Bley, Davey Wavey, V-Sqaured and many more in our Interview section! And let us know who you’d like us to interview next!