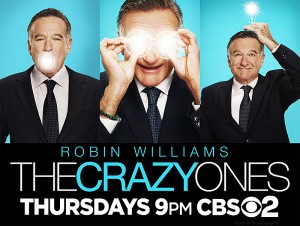 CBS has released a first look of the key art designs for the NetworkÃ¢ÂÂs four new comedy series, including THE CRAZY ONES, to begin appearing in print, online and outdoor later this summer. THE CRAZY ONES stars Academy Award winner Robin Williams, who returns to series television as larger-than-life advertising genius Simon Roberts whose unorthodox methods and unpredictable behavior would get him firedÃ¢ÂÂ¦ if he werenÃ¢ÂÂt the boss. The print design features Williams, playfully posing with illuminated light bulbs.