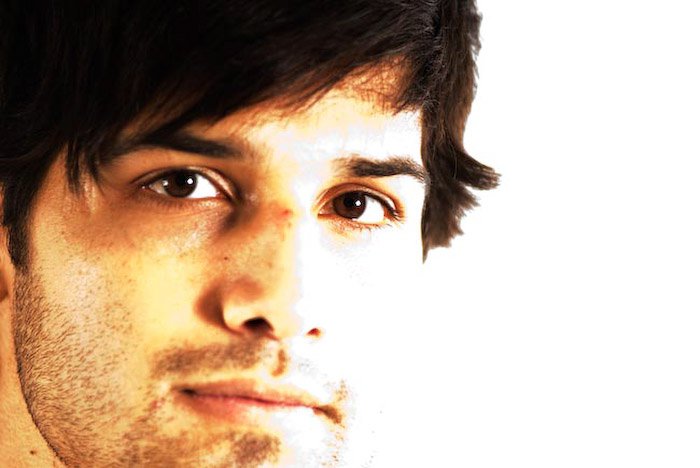 While planning this interview, we thought about titling it “Ricardo Laguna…The Sexy Latino Racer Masters the Old Dirt Road“, but after having interviewed him, we’re not sure that title fits appropriately.  Sure, he’s sexy, he’s Latino and he’s mastered the “old dirt road”…but all together, it sounds a little cliched.  Definitely more cliched than his response to what he hopes to achieve in the next ten years; “I hate to sound cliche, but as long as I get to ride my bike, have my family and good health, and hopefully find true love with a special lady, I don’t think I could ask for much more than that!”  At 30, he appears to have it all: a successful career as a BMX pro, his own television show on MTV’s tr3s bi-cultural station and good looks…all of which make him one of the most eligible bachelors…not to mention Latino bachelors…in the country! But we wanted to find out what makes him tick as he tricks and jumps over tracks…and in his own backyard! 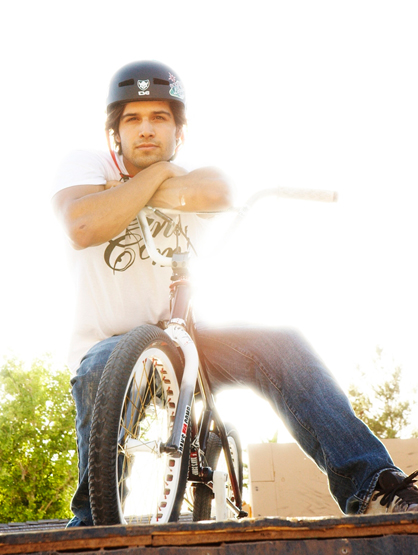 1. Introduce us to Ricardo Laguna.

Ricardo Laguna is a 30 year old kid that came from La Paz, Mexico and used to be a baseball player until his whole family moved to Las Vegas, NV when he was 13 years old. He first picked up a BMX bike for fun and never knew he could make it into a career.

2. You were born and raised in Mexico.  What was your experience like moving to the United States?

3. Would you ever move away from Las Vegas?

I don’t see myself moving anytime soon. This city always has something to offer! I can ride my bike year round plus have the winter activities and summer activities, and better yet – who can take a girl on a date to get pizza in New York, go to the top of the Eiffel Tower, and see one of the most amazing water shows at Bellagio all in one night? So far, no city has given Vegas a run for its money.

4. What has been the biggest challenge as an immigrant throughout your career and life in the US?

As I mentioned earlier, I think the language barrier was the biggest challenge first and foremost. To this day, I’m still trying to master the English language. But I think being bilingual has made my life more interesting! 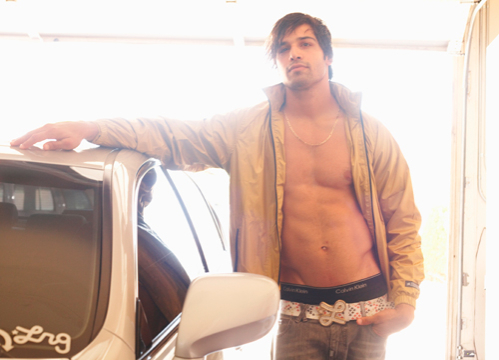 5. You’re very proud of your background and upbringings.  What are some advices you would give to young Hispanic children trying to accomplish their dreams while living in the US?

No matter what you want to achieve in your life – whether it’s being a doctor or a baseball player or even a bike rider – just keep working hard and don’t give up on your goals. Just like any Hispanic person trying to live the American dream, I’m working towards my goals every day. And if I can do it with a little kid’s bike, I know there are plenty of other Latinos who can do the same and more!

6. How were you introduced to the world of BMX?

When I first moved to Las Vegas, I lived in this trailer park and was trying to meet other kids in the neighborhood, so I picked up a mountain bike (not a BMX bike) and I came across these kids who were jumping out of a hole in the desert. Despite the language barrier, I managed to ask them what they were doing and they explained it to me with hand gestures. Little did I know there was more to BMXing than just jumping out of a hole onto flat ground. Later, they took me to a BMX track and explained that it was a legitimate sport and there was a national competition happening that weekend. I don’t remember why, but I never made it. A week or two later, I was coming back from dinner with my family and I saw the lights and I asked my parents to take me there. Once we pulled in to the track, I was like a little kid in a candy store. I saw people in uniforms, lights, music, the crowd, a crazy BMX track where they had obstacles and eight people who raced to the finish. After taking it all in, I looked up at my mom and said “Yo quiero una bici!” The rest is history!

7. What must every dirt bike course have to make it successful?

Ultimately it should be open minded and to come up with creative lines. What I mean by that is – sometimes in dirt jumping math, 2 + 2 doesn’t equal 4, and a jump that seemed impossible at first could turn out to be the most fun! That’s just one of the many reasons why I love riding my bike.

8. You have your own show on MTV Tr3s. Tell us about the show and what is different from other television shows.

I still can’t believe I have my own TV show so please don’t wake me up from this amazing dream! Once I met Wilmer and we were talking about my life, how I never had a hero my family scenario, he pointed out that so many Latino families have dealt with similar challenges and there aren’t too many shows that cater to a bicultural family audience. At first I thought there was no way someone would be interested in what I do since I just ride little kids bikes, but then he mentioned all the things I’ve been through with my family, learning the language, living in a city that everyone wants to visit, trying to have a balance between my American upbringing and my family’s traditional Mexican values, it’s the same issues a lot of Hispanic people in the United States deal with every day. 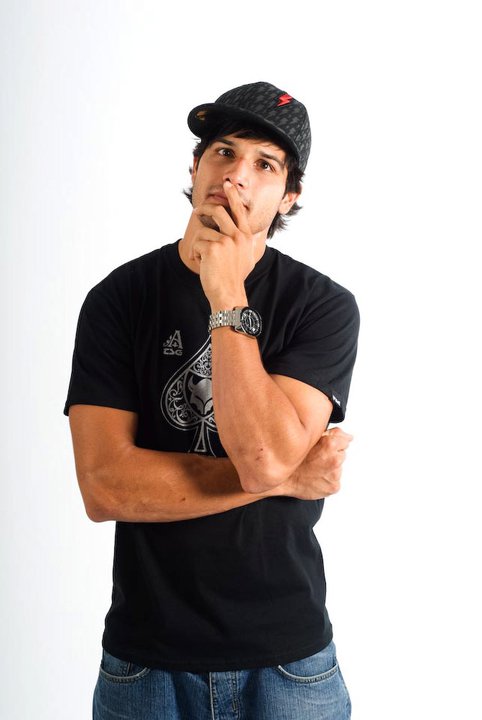 9. Walk us through a regular day of taping.  How do you start the day and how do you like to finish it?

No day is ever the same besides the fact that I know I’ll be filming anywhere from 12-15 hours a day, just going about my life and living in a city that never sleeps, so that should give you a pretty good idea! You can always tune into the show on MTV Tr3s or watch it online on the tr3s website page for The Ricardo Laguna Project!

10. Since we don’t know much about the BMX world, tell us what we would love about it.

New tricks, bigger jumps, all over the world, and it keeps growing!

11. How does one train for BMX challenges?

The beauty of being in a non-team sport is the more you practice, the more chances you will have to be rewarded. The more riding I do, the more creative I can get at the contests.

12. What’s the one thing that keeps you away from training?

I’m very much a homebody, so Vegas has yet to sidetrack me!

13. You recently just turned 30. What goals would you like to achieve before you turn 40?

I hate to sound cliche, but as long as I get to ride my bike, have my family and good health, and hopefully find true love with a special lady, I don’t think I could ask for much more than that! 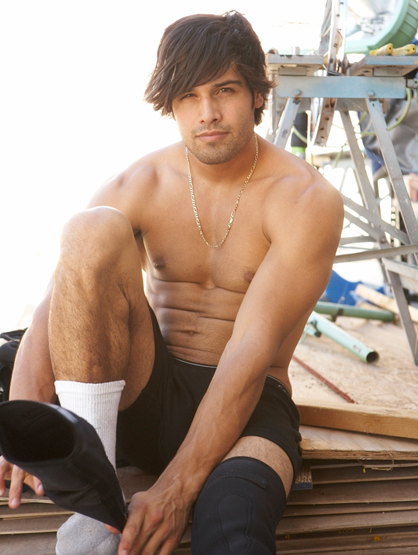 14. What is something we wouldn’t know by looking at you?

I love playing the piano, but I don’t know how! I can play a few songs right now, but one day I plan to conquer it!

15. You currently live in Las Vegas.  What are some of the hidden gems the city has?

Not a lot of people know that 20 minutes away from my house I have the lake where I can go wake boarding, cliff jumping and work on my tan! Then in the winter, I only have to drive an hour to be able to snowboard. Plus, Vegas is the city with the most skate parks not only in the United States, but the world. There’s also great hiking at Red Rock. For someone like myself who is an outdoor person, Vegas is the perfect place to be!

17. What do you think is the sexiest City? Hotel? Club? Place to kiss? Place to ride your bike?

If it’s not Vegas, the next best city would be Sydney, Australia. For hotel, I’d say Fontainebleau in Miami. For club, TAO, without a doubt! For place to kiss, there are so many options because Vegas has so many great views – anywhere from the Eiffel Tower to the Stratosphere – but I have yet to try it for myself. For place to ride, that’s a no brainer – definitely my back yard! 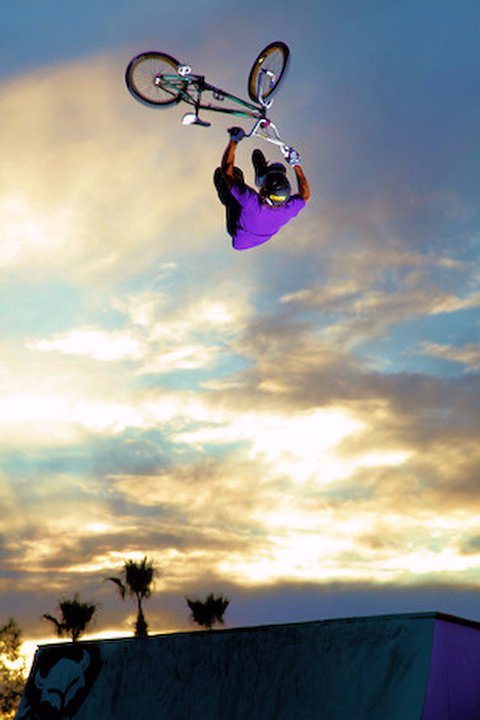 18. What was it like going back to the where you were born, La Paz, Mexico?

I’m bummed I don’t get the opportunity to visit La Paz as much as I would like, but I was honored that the government sent me out there to open a dirt park named after me. They had a huge grand opening ceremony and even gave me the key to the city – something I’m still mind blown about. Now I have even more reasons to go back to one of the safest cities in North America that still has a piece of my heart.

19. What’s next for Ricardo Laguna?

The possibilities are endless! And I can tell you – being at the start of my 30s, I’ve got even more that I want to accomplish!

Walking out of my door and riding in BMX paradise, year-round activities in Las Vegas and having my family, and not to mention my mom’s amazing cooking only 3 miles away from my doorstep.

Please check out all of our other interviews in our interview section!