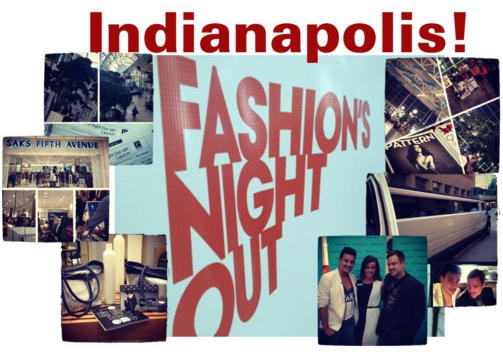 The success of last week’s Fashion’s Night Out/Indianapolis events can personally be described as revolutionary.  The night was filled with fashion related events throughout the evening and allowed fashion lovers to really express themselves.   The magical minds behind Pattern Indy and SocialClub19 put a team together to jump from hot spot to hot spot to experience the evening as a whole, witness each highlight of the night’s events and share with the world what Indianapolis has to offer with its very first official Fashion’s Night Out.

We started the night at the Indianapolis Artsgarden in downtown Indy for a pre -reception where we were introduced to many fashion bloggers, photographers, venders, sponsors, and designers eager to showcase their work and style.  Pattern Indy couldn’t have picked a better place for the start of the night.  The energy, fueled by the commotion of the city, really set the vibe for the night.

Nightlights TV captured the action, not only at the Artsgarden, but throughout the whole night.  We’ve included their videos to help capture the experience.  (Special thanks to Jason Jolliff of Nightlights TV who made the night especially entertaining!)

Video From The Indianapolis Artsgarden:

From downtown we drove to the Fashion Mall in a stretch Hummer limo, courtesy of A Class Act Limo!

First we stopped at Saks Fifth Avenue, one of our personal faves, watched a fashion show, and chatted with blogger and Indy columnist Leslie Bailey who hosted a blogger/media lounge.

Next, we literally shuffled our butts down to the Nordstrom wing,  where you could really feel the energy of people and vendors celebrating the night.  Tiffany’s and Co. had a photobooth, a DJ and the chicest set up of the night! The beautiful people representing the new luxury development City Way taught us all about what’s new to come downtown, including shops, restaurants and The Alexander, A Dolce Hotel.

From the Fashion mall we went to our second to last stop; the international Indianapolis Airport.  The idea of having a FNO event at the airport really peaked our interest.  The airport relatively  young, huge, open, modern, and in the past has hosted incredible parties.  Needless to say we were excited to see what they had in store for us.  Although it wasn’t what we were expecting, the efforts were definitely showcased.   The problem, for us, was the size of the pop up shops they were showcasing.  Although it was an interesting concept, we think it was probably lost in the planning.  An ongoing fashion show would have been amazing and would have garnered more attention as some people walking by seemed rather confused about the gathering.  It was also a long distance to drive to see several designers who’s work we’ve seen showcased several times before. But…they were extremely friendly and worked hard even late into the night!

The Video From the Airport:

Video From the Blu After Party:

Wait…you didn’t REALLY think you were going to get off that easy were you…NOT from the boys of raannt! Hahahahaha…here’s our real thoughts!

Although they would never identify themselves as the real organizers of Fashion’s Night Out, it was obvious to us that Jeremiah Williams of Social Club 19 and photographer Polina Osherov of Pattern obviously had tons to do with making this event a success.  What impressed us most, was that we thanked them several times, and on every occasion they assured us Fashion’s Night Out was a collaborative effort to further the fashion industry in Indianapolis.  Never once did they take full, or really any, ownership of the event.   We found this extremely refreshing because it has been our experience in the past that ownership of fashion events has appeared very important to some people…just saying.  Anyway, you both did an incredible job and deserve a round of applause!

We’d also like to extend a special thanks to our limo buddies who made the night a complete blast! In no particular order…you know who you are! Also, a special thanks to Indiana Vodka who made the end of the night in the limo a more than pleasant ride.  As one young lady mentioned, as she passed the bottle after taking a swig, “It’s so smooth and pure. Where can we buy it?”…It was literally the perfect advertisement! Only classy bitches swig Indiana Vodka! All jokes aside, we made some great friends that night and look forward to many more nights with those folks! Special thanks go out to Dedee Johnson of Forefront Indy! She was so completely endearing and genuine that we couldn’t help but find ourselves intrigued and delighted with her! She completely made our night! Hope you enjoyed your pajamas from Sweet Revenge! (By the way, the corsets designed by Sweet Revenge owner and designer Catherine Fritsch are so incredibly hot, if we were women, we’d wear them every day! Check them out HERE and Catherine..if you begin designing menswear, please let us know!)

And most importantly…who got Best Dressed in Indianapolis for Fashion’s Night Out??? Well, it didn’t take us long to come up with a name.  While we were watching the fashion show we ran into our good friend Laura Greenspan of Louis Vuitton, who was leaving work and catching the tail end of the fashion show at Saks.  She is also a friend of Reka from 100.9 RadioNOW, who was also in the limo with us, and she encouraged Laura to come along with us for the ride around town.  When we stepped outside, we found Laura waiting for us, completely redressed from some clothes she found in her car.  We were amazed! She always looks absolutely incredible, but this night especially, she looked like a columnist for Italian Vogue.  Do you speak Italian Laura…Oh, well…congrats anyway! Definitely look for yourself on our Best of Indy List in December…NOT to mention our annual Sexy List!  Reka and her friend Victoria also looked pretty badass…especially the shoes!

It was also great running into designer Ian Stikeleather, Zoe Renee Ashley Huse, Charles Letbetter, Leslie Bailey and Maggie Conner(of the Haute Hoosier) and her gorgeous sister! By the way Maggie, we totally agree with you on worst dressed: that boy band dressed in the white 1980’s Miami rejects was horrific! Who…would actually wear that crap???