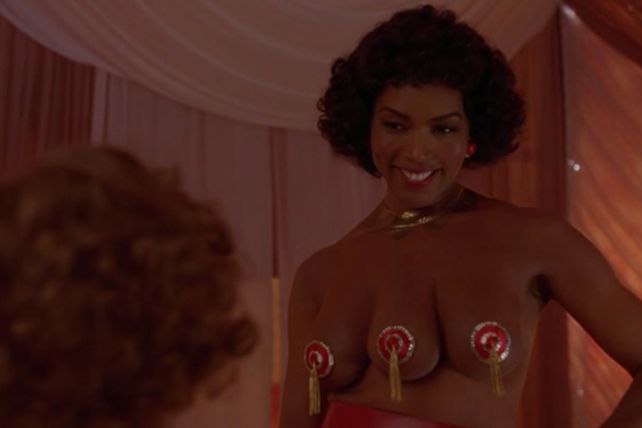 We’ve been huge fans of Angela Bassett for as long as we can remember.  We’ve followed her career through the Tina Years in What’s Love Got To Do With It into her other classic films including Malcolm X, Waiting to Exhale and How Stella Got Her Groove Back.  Now well into her 50’s, Angela still looks as good as she did over 20 years ago.  Last year she entered the highly talented cast of American Horror Story: Coven and this year she is back for her 2nd season on the show for American Horror Story: Freak Show as Desiree, the hermaphrodite with three breasts.  Check out what she had to say below about her cast, sex scenes with Evan Peters and the process of becoming Desiree! 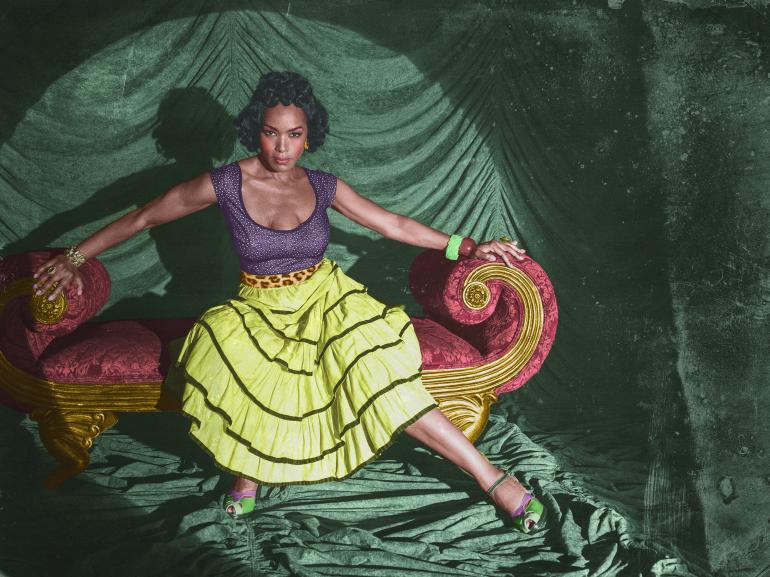 Is your character based on any real person in real life?

Well, of that I’m not sure, but I know that there are instances of individuals who have this sort of characteristic. What they’re called is intersex, today. In 1950s, of course, the term was hermaphrodite, but today the terminology is considered passé, especially in that community.

Well, I went to an FX studio, FX office and about, let’s see; I think it was three women and three men that took to cast a mold of my chest area and then attempt to get the color right, you know, the color, the tone, that sort of thing. Of course, the tone is very difficult and it still takes about 30, 40 minutes to paint it once it’s applied.

What is it like working on the show and working with FX?

Oh, well, yes. Well, the work environment is really wonderful. I mean, it’s a hectic, fast paced sort of work environment, but the cast, the crew are tireless. They’re dedicated. They’re talented as heck. We put hours and hours in. There’s nothing but support from the network, which it’s evident from being picked up for another season, I believe I heard, after airing of the first show. That’s just indicative of the support that we experience. 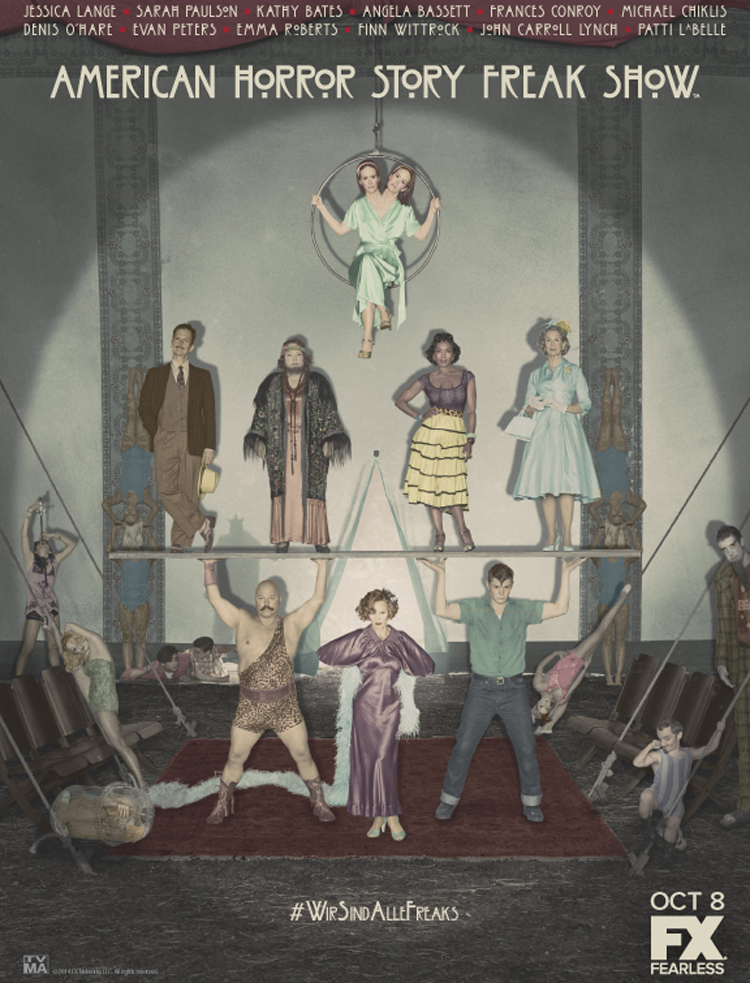 Could you talk a little bit about working with your ensemble cast?

That was one of the prevailing reasons for me joining the cast. I couldn’t believe I’d get an opportunity to work with Jessica Lange and Kathy Bates in a lifetime, especially at the same time. It’s wonderful. In some years, I mean, well, last year most of my scenes were with Kathy and Jessica. This year, mostly Chiklis and now Emma Roberts and the like. We’ll see. We’ll see. Everyone is just an ultimate professional. We have a good time. We have a good time with it. We all have an appreciation for this crazy world and the things that we’re asked to do. It stretches us and grows us. The fact that we get to come back year after year and they fashion some completely new insanity for us to play out is a plus. It’s thrilling.

Can you talk a little bit about what kind of interaction you’ve had with folks in New Orleans about being on this show and also last season? What kind of things do people say to you? Do they talk to you about Marie (Laveau) and now, also about the new character?

Oh, yes. Yes. I love New Orleans and I love New Orleans folk. I was really concerned portraying one of the historical figures of this city who’s so beloved and revered. I so wanted to get it as right as I could. I was really happy with the comments that folk would make that I was the best Marie or they really enjoyed my interpretation of Marie. They were pleased by and large. I didn’t run into anyone who was displeased, so that made me happy.

A lot of new eyes came to the series based on it being set here and based on those characters, Marie, Madame LaLaurie, and the like. This year, you do run into, well, someone just drove me to the airport and she said, “Oh, I can’t watch horror things.” You do from time to time run into folk who just think, they imagine just because of the title that it’s a really, really scary show. It can be initially, but there’s something about it that just grabs your imagination and then you can’t wait until the next week, and the next episode. Let’s see, what did they say? Sometimes I do get comments that it’s—what do they say? Demonic. I said, oh, no, no. Let’s not look at it that way. Let’s not look at it that way.

We saw the beginnings of a friendship develop between Desiree and Ethel this week on the episode, can you tease anything about the possible friendship or will they team up against Dell?

That’s the thing. We really don’t know what’s coming in the subsequent episodes and the subsequent scripts. That’s the aspect of this that makes it a little bit frustrating or difficult for us. I guess we don’t have input, but we might have influence. We’ve played it as good, good friends. It remains to be seen. Maybe they’ll see that in the writer’s room and it’ll take them down a different road then they had anticipated. That can, and does happen, and has happened in the past. We’ll see. I’d like to be friends with Ethel. We were such archenemies last year for all eternity as it turned out.

I didn’t have a clue whatsoever what the part might be, what it might encompass when I signed on. I just knew I had a great time the previous year, and if that was any indication, it was going to be a wild ride. I think it was about two weeks before I was scheduled to come down to start shooting that I got the, you know, the hot off the press script. I sat down to read it to see and I remember wondering, “Now, how am I going to know who I am?”

Then you read the stage direction, “African American woman in her 40s, hermaphrodite, three breasts, and a ding-a-ling.” You’re like, oh, my gosh. You immediately close the pages, and have to walk around, and process that for a minute. You’re thinking, “What does that mean?” Oh, my gosh. If they thought I was crazy demonic last year, what are they going to think this year?

Do you feel like the American Horror Story cast is sort of a family of performers as you go from season to season? Do you feel like more of a part of that now that this is your second time on the show? 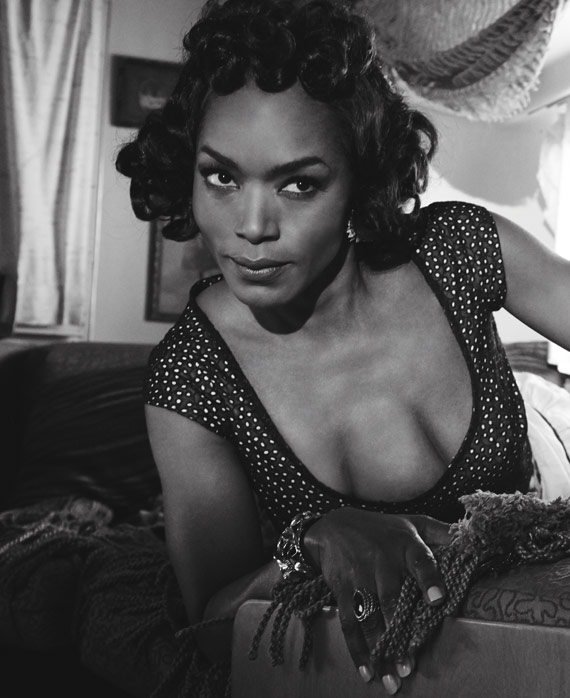 Today it seems like since we don’t have the actual freak shows, we have reality TV. I was just wondering for you, do you think there’s something kind of in our human nature where we want to see people that are kind of worse off than we are and we kind of revel in that? Do you think there’s some psychological basis for why people have wanted to see that, apparently, over a long period of time?

Our human nature? I think I would tend to agree. There might be a little of that, where there’s a little enjoyment in the misfortune of others. Not to their ultimate detriment, but a little bit of enjoyment for them doing worse off or getting into trouble; the whole thing about like, watching a car crash or something, when we slow down, and rubberneck, and look. I think it might be. There is, I think, one freak show out in LA, out in Santa Monica, Venice Beach, or something. I haven’t visited there, but I’ve seen some footage of that. I think they may even have a reality show themselves. It’s more like a tattoo thing and a sword swallowing thing.

We saw your character, actually from this season and last season, kind of get really intimate for the first time, and your scene with Evan Peters, which you both acted beautifully. Would you say that that was awkward at all on set? How was it shooting that?

What’s the process that turned you into Desiree? How does she get that third breast? How long does it take to put on?

Well, I go in. I go into my regular makeup artist. She applies the appliance to me, so that it’s there basically. Then I go over to the special effects trailer where her husband makes sure the edges and everything sort of blend seamlessly. I guess I can say that. From there, he and the other special effects gentlemen will begin to apply the paint. They’ll start with brown. They spray it on. They’ll start with the brown. They’ll go to the red, and yellow, and green. It’s amazing these colors and undertones that they claim you possess. You’re like, oh, those are weird, weird colors. Then he’ll take a photograph of it to make sure that it appears as if it’s my own and based on that he’ll maybe go in, and do so more painting, and carry on.

What was your initial reaction when you first tried on the prosthetic?

Well, I was glad it wasn’t on my face. I’m claustrophobic. It’s amazing. You can just a little after about 14 hours of it being on. The initial appliance was extremely heavy. I think it was made of silicon. It started out fine, but after about hour number 12 and on it became hot and heavy. I believe it started sagging, which I’m like, what is the point of having three sagging breasts? No, this is not good. They reworked it and made it out of foam, which I was so, so pleased about because it’s the difference of night and day. Still after about 12 hours that internal heat, you begin to sweat. You begin to itch. You can’t really provide relief because you can’t get to yourself, you know?

Since you’re dealing with such dark material on set for 14 hours a day or so, are there any particular people behind the scenes that provide a little bit of levity to get you through those heavier scenes?

Let’s see, well, Sarah Paulson can make me laugh really easy, so can Gabby when she’s around. I haven’t gotten the opportunity to spend any time with her this year. But, Sarah is pretty funny to me. Michael is light-hearted. Emma is pretty crazy, especially last night, it was she and I till midnight outdoors in the cold. She’s pretty funny.